First baseman Prince Fielder had 2 base hits at Rogers Centre '13 as the Steel Groove beat the Lansdale Red Beards 4 in 11 innings by the count of 4 to 2.

The game was deadlocked at 1 after nine full innings. Steel won the game in the 11th inning. Fielder led off and started the attack as he was hit by a pitch. After an out was recorded, Matt Carpenter stepped in and he lashed a single. Bryce Harper followed, but he was set down on strikes. Miguel Montero was up next and he lost the ball over the fence for three runs (his 7th of the season). Both teams totaled 10 hits on the afternoon.

Justin Masterson(5-7) was the winner allowing 1 run in 10 innings. Masterson got help from Tyler Clippard who earned his 1st save. Will Smith(3-4) was tagged with the loss in relief. He allowed Steel 3 runs in 2 innings of work. 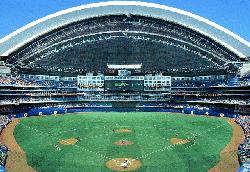