18,904 fans were treated to a fine game at Citi Field '13 as only one run separated the combatants at game's end. The Killer Rabbits of Caerbannog won by the slimmest of margins, 6 to 5.

Richardson never recovered after Killer Rabbits took the lead in the 4th inning with 2 runs. Gaby Sanchez led off and keyed the rally when he drew a walk. Matt Carpenter stepped up to the plate and he was hit by a pitch. Alex Gordon was a strikeout victim, unable to help out. After another out, Craig Gentry came up and he tripled plating two runs. Richardson had a chance to come back in the 9th but they came up short.

Ken was subdued when questioned after the game, 'Sure, this kind of loss takes a while to get over, but heck, we're all professionals. We've been through this many times - it's the nature of the game. We'll be fine - as for me - I'll be ready to go again tomorrow!' 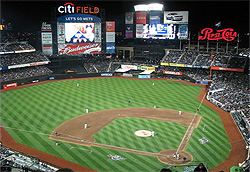 
A-Subbed Defensively (2B) For Dozier In 8th Inning