Adam Wainwright allowed Sparky to rest his bullpen, tossing a complete game as the Teaneck Tornado defeated the Killer Rabbits of Caerbannog 12 to 6 at Yankee Stadium '13.

Killer Rabbits fell behind quickly as the Teaneck offense came through in the first inning when they tallied 3 runs on 3 hits. The highlight belonged to Jed Lowrie, who made the crowd happy when he laced a base-knock plating two runs. Teaneck had 13 hits for the afternoon.

The victory was credited to Wainwright(15-12) who went the distance, allowing 6 runs. Chad Gaudin(2-3) was tagged with the loss. He was knocked around by Teaneck, allowing 7 hits and 5 walks in 4 innings. 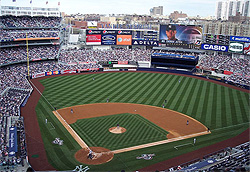