Miguel Cabrera smacked 2 homeruns as the Chicago South Siders rallied impressively to win in dramatic style over Nevada Nukes, 7 to 5.

Chicago came up with the deciding runs in the 9th inning scoring 3 runs on 2 hits. After an out was recorded, Eric Hosmer started the attack as he drew a walk. Starling Marte came to the plate and delivered a base-hit. Anthony Gose then drew a walk to load the bases. Salvador Perez stepped in and he delivered a single, and an error was also committed, emptying the bases. Nevada proved to be no trouble in the bottom of the 9th.

Luis Avilan(8-3) went 2 innings allowing 2 runs for the win. Avilan got help from Kenley Jansen who was credited with his 37th save. Joe Kelly(11-6) was charged with the loss in relief.

'We just kept swinging the bats and didn't give up,' Cabrera said. 'If you just keep trying good things can happen!' 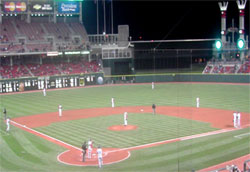