Left fielder Rickey Henderson slammed 2 homeruns and had 3 RBI as the Havana Daydreamers topped the 2016 Barnacle Barnstormers by a score of 6 to 3 at Yankee Stadium '05.

The home town fans were very appreciative of the fine hitting performance provided by Henderson. He smashed a solo-shot out of the park in the 1st inning, cracked a two-run shot (his 11th of the season) in the 4th inning and smacked a single in the 6th inning. Havana finished with 9 hits while 2016 Barnacle ended up with 5.

The win was credited to Van Lingle Mungo(4-6) who went 7 innings allowing 3 runs. Rod Beck recorded the save, his 12th. The loss was charged to Steve Carlton(6-4). He served up 3 homeruns in his 8 innings. 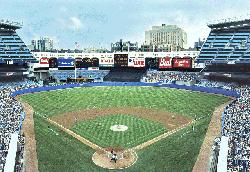