At Candlestick Park '61, the Memphis fans witnessed a great pitcher's duel. Mickey Lolich(6-9) finally bested his Memphis opposite, Mike Cuellar(7-6), by the score of 2 to 1.

Union City took the lead off Cuellar in the first inning as they scored 2 runs on 1 base hits. That early scoring was all that Lolich needed. Memphis threatened in the 9th but Union City was able to put down the rally.

Lolich got help from Dale Murray who was credited with his 19th save. The loss was charged to Cuellar. He allowed just 2 hits and 1 walk in 7 innings.

Mark McClellan was clearly disappointed after the game. 'It was a manager's nightmare out there', he said, 'We should have had this one.' 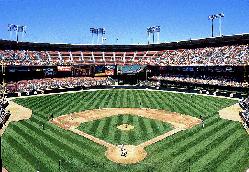