Willie Mays had 3 base hits and 2 RBI as the House Stark Direwolves defeated the Daisy Hill Blockheads by a score of 7 to 5 at Three Rivers Stdm '78.

House Stark came through with the game-winning runs in the top of the 9th inning with 2 runs using 3 hits. Mays led off the inning for House Stark when he doubled. After an out was recorded, Eddie Stanky stepped up to the plate and he stroked a single which scored a run. After another out, Mariano Rivera came up and he drew a walk. Barry Larkin was up next and he banged out a one-base hit scoring the final run of the inning. This was a game of many highs and lows for the home town fans, as the lead kept changing - 5 times in all.

The victory went to Rivera(10-5) who went 2 innings, allowing no runs. Kazuhiro Sasaki(2-9) was the loser in relief. He allowed 2 runs and 3 hits in 1 inning.

The House Stark ballclub's record now stands at a division leading 57-44. With this loss, Daisy Hill has a 3-7 record of late, 40-61 overall. 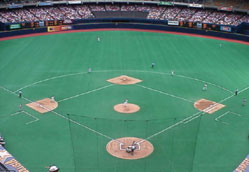