Catcher Gabby Hartnett touched them all at Fenway Park '46 where the BS Detroit Overlords beat the Thermal Wastelanders by the score of 1 to 0.

Mike Caldwell(2-3) gave up the game's only run when BS Detroit scored in the 4th inning. BS Detroit had just 6 hits for the afternoon.

The win was credited to George Suggs(4-0) who went 5 and 1/3 innings allowing no runs. Mariano Rivera was credited with his 9th save. 'I had a little blister on my index finger before the game, but I thought it was nothing.' Suggs said. 'I was lucky I got a win because I couldn't put the ball where I wanted it.' 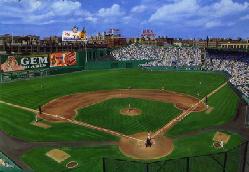