Center fielder Pete Browning had 4 hits and scored 3 times as the sizzling Republic Thunderbolts outscored the Thermal Wastelanders 8 to 5.

Republic took the lead off Mike Caldwell in the first inning with 2 runs utilizing 3 base hits. Browning started the inning off right when he lined a single. Caldwell then let one slip out of his hand for a wild pitch. Ed Delahanty then stroked a single. Chino Smith stepped in and he drew a walk to load the bases. After another out, Dan Brouthers got his chance to keep things going, but he went down on strikes. Glenn Beckert contributed to the rally and slapped a one-base hit knocking home two runners. Republic ended up with 17 hits for the game while Thermal had 9.

Don Sutton(15-13) was the winner allowing 5 runs in 8 innings. Jerry Fosnow recorded his 17th save. The losing pitcher was Caldwell(9-13). He got hit pretty hard, allowing 12 hits and 6 walks in 6 innings.

Republic continued on their recent roll, their winning streak now reaching 7 games and counting. 'Everything seems to be going right for us' said Outta Leftfield. 'I've got the easiest job in the league right now!' 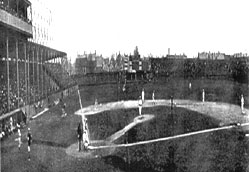