Justin Verlander mowed down 12 Oly Puny Humans batters and Josh Gibson slammed a homerun and had 4 RBI at Crosley Field '57 as the Alan Trammell '87 MVP beat the Oly Puny Humans Barn2016Cap100N 9 to 3.

Gibson was a thorn in the side of the hometown fans as he enjoyed a fine day at their team's expense. He stroked a single in the 2nd inning, lofted a three-run bomb (his 13th of the season) in the 3rd inning and singled bringing in a run in the 5th inning. Alan Trammell banged out 9 hits on the afternoon.

The winning pitcher was Verlander(5-2) who allowed 3 runs for the game. Satchel Paige(3-3) was tagged with the loss. 'He was really impressive today,' Paige said of his counterpart. 'Our guys were just swinging at air.' 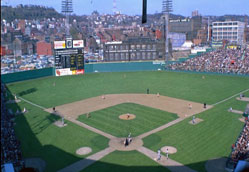