Phil Cockrell came through with a solid 6 and one third innings at Cinergy Field '00 where the New York Knights beat the Y Tu Mama Tambien 2 to 1.

New York promptly took the lead in their half of the first scoring one runner. Maury Wills ripped a base-knock. Rod Carew was next and he laid down a sacrifice bunt. Wills stole third and scored when the ball ended up in the outfield. Y Tu Mama made it exciting in the 9th, but they were unable to push the needed runs across.

'We won because we did the little things right.' Pop Fisher said after the game. 'This is why we practice things over and over and over, so when we get in close games we don't make mistakes.' 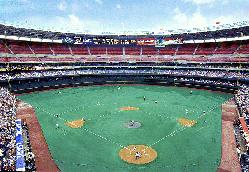