Butch Henry pitched 6 strong innings and Bobby Thomson had 3 base hits and 2 RBI as the Beachmont Storm defeated the Hell's Kitchen Punishers in 10 innings by a score of 3 to 2 at Fenway Park '05.

The score was knotted at 2 after nine innings. Beachmont came out on top in the 10th inning. Carney Lansford banged out a single. Oscar Gamble came next and he drew a walk. One out later, Tim Foli was next to the plate, but was promptly struck out. Tom Henke then bounced one in the dirt for a wild pitch. Honus Wagner stepped into the box and was walked intentionally to load the bases. Thomson added to the outburst and delivered a single giving Beachmont the victory and sending the 21,978 home-town fans home happy. The game was a scoreless duel until the 6th inning. 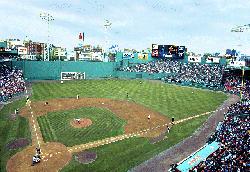