Right fielder Andy Van Slyke had 4 hits and 2 RBI as the Jive Turkeys defeated the Prince Charmings in 11 innings by a score of 6 to 5 at Busch Stadium '05.

Both teams were tied at 5 runs apiece after nine innings. Jive was victorious in the 11th inning. Joe Birmingham drew a walk. Terry Pendleton was next and he drew a walk. Two outs later Van Slyke stepped in and he reached on an error giving Jive the win much to the delight of the home town crowd. Overall Jive out-hit Prince 13 to 9.

Bob Humphreys(1-0) picked up the victory, allowing no runs in 1 inning. Tom Burgmeier(1-2) was hit with the loss in relief. He was the victim of a defensive lapse and did not allow an earned run in the game. 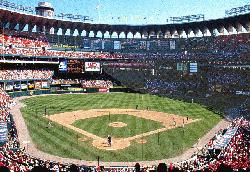