41,602 fans watched an exciting game at The Kingdome '78. The Storm Riders topped the Memphis Magicians by the slimmest of margins, 4 to 3.

Storm jumped on top of Memphis in the 4th inning scoring a single run. Eddie Mathews reached on an error. After an out was recorded, Ted Kluszewski stepped up to the plate and he doubled. Tony Pena then hit a sacrifice fly scoring the run. The pitchers took over after the 4th inning as neither team was able to score again.

'I just wanted to give my team a chance to win.' said Scott, 'I got burned on a couple of pitches. But we won the game, and that's all that matters.' 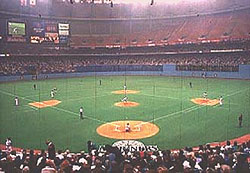