Rick Reuschel(3-1) and Claude Hendrix(0-2) treated the Martian fans to a fine pitching duel at Tropicana Field '05. The Martian Visitors eventually emerged as victors over the Ball State Cardinals by the score of 1 to 0.

Reuschel earned his pay with a solid performance for Martian. He went 6 innings allowing 7 hits and 1 walk lowering his ERA from 2.18 to 1.69. Martian won despite being out-hit by Ball State 8 hits to 3.

Reuschel was helped out by Ron Perranoski who recorded his 1st save. 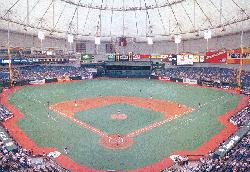