Nellie Fox had 5 hits and Herb Score pitched a complete game as the The Wrong Stuff defeated the Encinitas Swamis by a score of 8 to 5 at Cleveland Stadium '57.

In the top of the 2nd inning The Wrong went on top for good scoring one runner using 2 hits. Elmer Flick tripled. Tommy Davis was a strikeout victim, unable to help out. Manny Sanguillen then reached on an error scoring the run. The Wrong had 17 hits for the afternoon.

Score(15-6) picked up the complete game victory, allowing 5 runs. Bob Feller(9-10) was given the loss. He allowed a few too many baserunners giving up 12 hits and 3 walks in 5 innings. 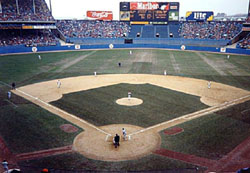