Note: This morning (July 29) between approximately 7:30am and 10am ET, the main site at Strat-O-Matic.com will be undergoing maintenance to prepare for the start of pre-orders for the new summer Windows and Board game products. If you are already logged in to Strat-O-Matic 365, we expect you to be able to access your teams as normal, but there may be a period during the maintenance where you may not be able to login, so please plan accordingly.

Gabby Hartnett left the yard and had 2 RBI at Shibe Park '38 where the Texas Wildcatters beat the slumping Baton Rouge Extra Men by the score of 6 to 4.

Texas tallied 3 runs in the bottom of the 7th inning. The big moment was provided by Hartnett, who electrified Shibe Park '38 when he lifted one out of the park for a two run home run (his 25th of the season). Baton Rouge had a chance to come back in the 9th but they came up short. 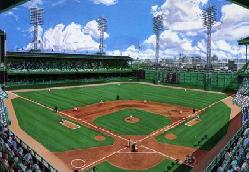