Kevin Brown went 7 strong innings and third baseman John Beckwith had 2 base hits at SBC Park '05 where the Peter Potamus beat the Old Glory 6 to 2.

Peter took the lead off Dean Chance in the first inning scoring a single run utilizing 2 base hits. Peter had 12 hits for the game and Old had 6.

The victory was credited to Brown(7-2) who went 7 innings, allowing 1 run. Norm Charlton gained credit for his 2nd save. Chance(3-4) was the losing pitcher. He was knocked around by Peter, allowing 9 hits and 6 walks in 6 and 2/3 innings. 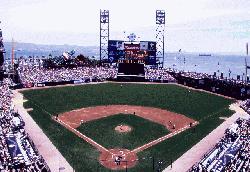