Third baseman Jim Thome rocketed 2 homeruns at US Cellular Field '05 as the Camden Riversharks beat the Old Glory by the count of 6 to 5.

Camden started with a bang, jumping out to an early lead in their half of the first with 2 runs on 2 hits. Hughie Jennings led off and keyed the rally when he slapped a one-base hit. Jennings got a great jump and stole second easily. Norm Cash then drew a walk. Jack Clark came up and he laced a base-hit resulting in a run. Al Simmons stepped into the box and grounded into a double play scoring the final run of the inning. Camden out-hit Old for the game, 11 hits to 6.

Greg Maddux(11-2) got credit for the victory, pitching 8 and 1/3 innings and allowing 5 runs. Eric Gagne recorded his 12th save. Christy Mathewson(5-5) was the losing pitcher. He was hit hard and gave up 9 hits and 4 walks in 6 innings.

With this win, Camden has a division leading 38-15 record. They have been 7-3 lately. Old continued their losing ways and their record is now 28-25. They are 1-9 in their last ten games. 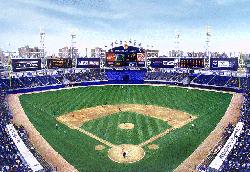