Mickey Mantle touched them all and had 4 RBI at Fulton Cnty Stdm '78 as the Oregon Kittens staged a comeback win over the slumping Donkey Kongs by the count of 11 to 9.

Mantle enjoyed a big day at the plate. He smacked a single scoring two baserunners in the 2nd inning, popped a two-run clout over the fence (his 38th of the season) in the 6th inning and delivered a base-hit in the 8th inning. Oregon kept the pressure on throughout the contest as they scored in 6 different innings.

The victory went to Dick Radatz(1-3) who went 3 innings, allowing no runs. Radatz got help from Norm Charlton who was credited with his 14th save. Sandy Koufax(6-18) was the losing pitcher. He allowed a few too many baserunners giving up 14 hits and 2 walks in 8 innings. 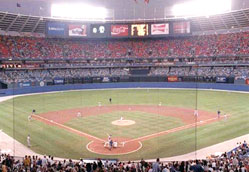