George Sisler hits for cycle in 8-6 victory over Lothbrok

George Sisler hit for the cycle and had 3 RBI and Mariano Rivera had a strong outing as the Green Mountain Grafters staged a dramatic comeback over the Ragnar Lothbrok in 10 innings by a score of 8 to 6 at Tiger Stadium '78.

The score was tied at 5 after nine. Green Mountain was victorious in the 10th inning. Dustin Pedroia got things going when he stroked a single. After an out was recorded, Larry Bowa came to the plate and stroked a base-hit. Bowa took second on the throw. Bernie Williams dug into the batters box next, but he struck out. Sisler stepped in and he rifled a three-run blast (his 7th of the season) making Green Mountain the victors to the delight of the home town faithful. Green Mountain had 14 hits for the afternoon while Ragnar had 10. 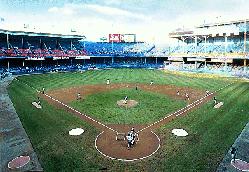