Center fielder Willie McGee had 4 hits and 2 RBI as the Carson Comets VI defeated the Ragnar Lothbrok in 10 innings 8 to 7 at Target Field '11.

Both teams were tied at 7 runs apiece after nine innings. Carson finally pulled the game out in the 10th inning. After an out was recorded, Frank Robinson banged out a single. One out later, McGee came to the plate and delivered a base-hit. Gene Brabender then fired a sharp breaking ball that appeared to cross-up the catcher. In any event, it got by him and was ruled a passed ball making Carson the winners and sending the 48,588 fans home happy. Carson ended up with 13 hits for the game while Ragnar had 10. 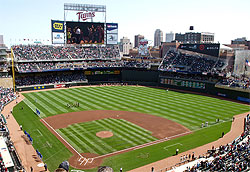