Roger Clemens mowed down 12 Asbury Park batters at Royals Stadium '78 as the Caldwell Crypt Kickers won in their last at-bat beating the Asbury Park Artists by the count of 6 to 5.

Caldwell scored the deciding run in the 9th inning. After two were out Johnny Kling slapped a base-hit. Kling swiped second base. Joe Kelley then reached on an error. Willie McGee followed and he reached on an error giving Caldwell the win and sending the home town fans into a frenzy. Asbury Park was out-hit by Caldwell, 11 hits to 8.

The victory was credited to Bob McClure(2-0) who went 1 and 1/3 innings, allowing no runs. Willie Hernandez(4-2) took the loss in relief. He was the victim of a defensive lapse and did not allow an earned run in the game. 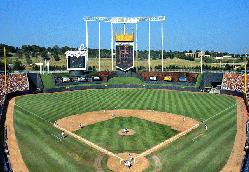