John Clarkson had a strong outing at Wrigley Field '66 as the Barnburner Pomeranians beat the South Park Italians by the count of 2 to 0.

South Park fell behind quickly as the Barnburner offense came through in the first inning scoring a single run. That early scoring held up. After the 4th inning, neither team was able to score.

Clarkson(7-7) got credit for the victory, pitching 8 innings and allowing no runs. Walter Johnson was credited with his 8th save. Bob Gibson(8-6) was the loser. He gave up just 2 runs and 5 hits in 8 innings. 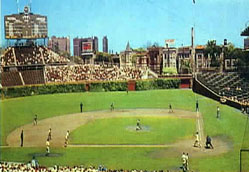