Designated hitter Reggie Jackson slammed a homerun and had 2 RBI at Ebbets Field '20 as the Oregon Stooges pulled off a dramatic comeback beating the Barn Stormers by the count of 4 to 3.

Oregon erupted with the game winning runs in the 9th inning with 2 runs using 2 hits. After an out was recorded, Billy Hamilton got things going when he drew a walk. Eddie Collins followed and he lined a base-hit. Earl Averill then was hit by a pitch. Willie McCovey stepped in and he drew a walk scoring a run. Jackson stepped into the box and stroked a single giving Oregon the win and sending the home town fans into a frenzy. Oregon had 9 hits for the afternoon while Barn had 6.

'What a win!', Liska said. 'These are the kind of games that stand out in your mind at the end of a season.' 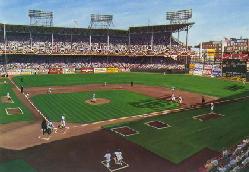